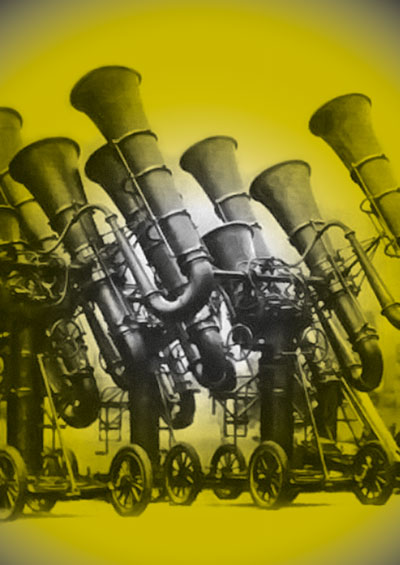 the only bass saxophone quartet in the universe

Cadence Mag./US, jan. 2017
DEEP SCHROTT is a bass saxophone quartet whose latest CD is THE DARK SIDE OF DEEP SCHROTT VOl. 2 [Poise edition 24]. If you are follower of sax quartets/ensembles this should appeal to your sense of harmony and they are different, as they like to point out they are the only bass sax quartet. On this CD there are 23 tracks [77:32] ranging from just over a minute to six minutes in length playing everything from originals to Ayler [Our Prayer] to AC/CD and Schubert. I think this group could fit very well in a program of hymms and spirituals. It all goes down well and this is one harmonious frog pond with humor and depth. A croaking good listen... They deserve to be known as the best bass sax quartet around.

Jazz Journal, nov. 2013
This third album from the self-styled "first and only all bass saxophone quartet in the world" is indeed an invitation to the dark side. Gone are the Kylie Minogue, Beatles and Dylan covers of their previous offerings in favour of the 'dirgier' end of the 70s rock spectrum. That said, DS have by no means mislaid their sense of humour  as evinced by the Spinal Tap-esque black on black cover.
What we have is a selection of bass-heavy versions of songs from Alice Cooper, System of a Down, Black Sabbath and so on (heavy metal played with heavy metal) and as usual, the choice of music and the arrangements are spot on. In particular there is something about the music of Black Sabbath that turns out to be peculiarly suited to the bass saxophone  a brooding sense of deep menace  and Dirk Raulf & Co. make the most of this with a medley of classic early Sabbath tunes as the albums centrepiece.
Lest you think that 'novelty' covers are the extent of Deep Schrott's abilities, similar to their 2010 debut One there are a smattering of original compositions which fit the 'dark side' theme well. From the relentless drive of "Stag" and the funereal intro to "Secret Service", to the simple low-tempo power of "Yamantaka", when freed of other songwriters' structures and the melodic expectations of the listener, the quartet chooses to explore somewhat more disjointed territory. The optimistic jollities of the past are long gone and evenly interspersed as these tracks are, they provide a dark surrounding landscape for the more familiar fare.
However, it's the recasting of those familiar tunes which will probably make the most impact (and be in demand at live performances) and whether it's a Jim Morrison vocal line, a David Lynch soundtrack, or a Kurt Cobain guitar riff, Deep Schrott prove that it's all grist to their idiosyncratic bass saxophone mill.

Jazz Journal, 2010
A somewhat neglected instrument perhaps, the bass saxophone is rarely a 'main instrument' among modern musicians. Although the likes of Peter Brötzmann, Roscoe Mitchell and Jan Garbarek have all picked it up at times. So all the more unusual to find a quartet consisting of nothing but. Deep Schrott (intriguingly "schrott" is German for "scrap", as in metal) are the self-proclaimed "only bass sax quartet in the universe".

With covers of songs by Led Zeppelin, King Crimson, Peter Green's Fleetwood Mac and even Kylie Minogue, this could so easily have been a novelty album. However there is something quite mesmerising (and smile-inducing) about their arrangements of such familiar tunes for such an unfamiliar instrument. Smiles aside, it is the originals here that best showcase their exploration of the bass sax's sonic possibilities, including percussion. So, a combination of fun and breaking new ground  what more could you want?